This Week’s Bit of String: Phoenixes and falcons

Among fans, then. I was tickled too by a couple in their fifties, scampering around the outdoor sets and giggling while they waited their turn for photo ops. ‘Look at that,’ marvelled the man, peering through the back door of the Knight Bus. ‘You can see the beds, and all!’

Inside the creature workshop, the woman squealed and pointed at the display case where Fawkes stands regally. ‘It’s that falcon! From the headteacher’s office.’ 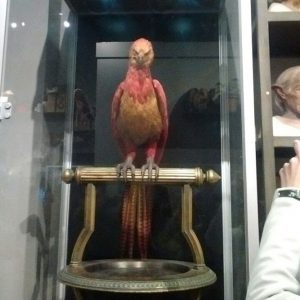 So I got the impression these two fans hadn’t read the books. But they were no less enchanted by the story, perhaps enticed by the added celebrity sparkle of the film studio.

What’s the precise magic of a franchise that enlivens so many people, whether encountered on page, on screen, or in a bright-plumed animatronic bird? Different factors might appeal more to one fan than the next, but I believe even we non-fantasy writers can replicate some of this alchemy.

Lia, who tweets as @LiaTheBookBat, loves the parallel universe JK Rowling illustrates, and the possibility of ‘impossible things fuelled by magic.’ I agree the juxtaposition is intriguing: relatable characters and specific, just slightly altered details make the wizarding world seem ever so close.

Thriller writer LV Matthews (@LV_Matthews) notes that the ‘good overcoming evil story’ is especially relevant ‘in this crazy world.’ Certainly, Rowling pulls off this epic theme very well, examining different reasons people are attracted to good or evil, confronting friction between different members of the ‘good’ side, and even forcing the protagonist to question whether he himself might have evil tendencies.

Harry Potter and the Recipe for Enchantment

Personally, I was struck by how walking around the full model of Hogwarts felt like coming home. The first view of those turrets and spires, and I might have been Harry or Hagrid or even Tom Riddle, recognising a beloved place.

Strong emotion passed on from characters to readers: that’s the real magic here. Such deep empathy, whether for fictional or nonfictional people—that’s magic, and a mighty, unifying force.

Anyone following this blog since its launch in the wake of the USA’s 2016 presidential election will know creating that kind of magic is my favourite part of writing and reading. But there’s a lot involved in achieving this. All the factors above were instrumental in JK Rowling’s success with it, plus one more overarching element.

Even more than Hogwarts, the part of the tour that moved me most was Platform 9 and 3/4. Toward the back of the train, a car was open to show two different scenes. One end depicted Harry’s first ride on the Hogwarts Express, while the other showed the series’ final scene, ‘Nineteen Years Later.’

At its roots the Harry Potter series is a Cinderella story, Hagrid showing up on Harry’s eleventh birthday like a Hairy Godmother. (Or something.) Watching Harry’s journey, painful though it is at times, gives us hope, as referenced by my Twitter acquaintances. 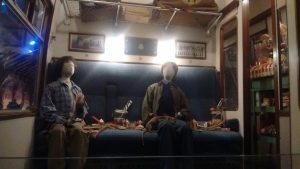 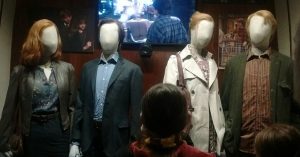 His story lets us believe that however ordinary-looking, however put down we may be even by the very people meant to care for us, it’s not out of the question that in some alternate realm we are renowned, and we may prove ourselves worthy. Hope liberates our empathy—right or wrong, it’s easier to feel for someone who has an inkling of a chance.

(Side note: JK Rowling didn’t achieve the same heights with The Casual Vacancy, maybe because this essential ingredient was omitted. The characters were wide-ranging and believably flawed, but offered very little hope.)

So we are drawn in, enticed by clever touches like owls and wands, encouraged by The Boy Who Lived until we’ve fallen as hard as if we’ve eaten a box of Romilda Vane’s chocolates. In our own writing, it’s worth remembering the mixture of minor detail, promise of redemption, and characters that inspire deep, true feeling. What would you add to the potion? 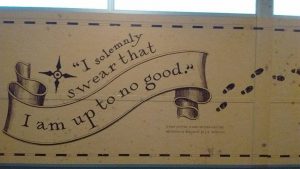